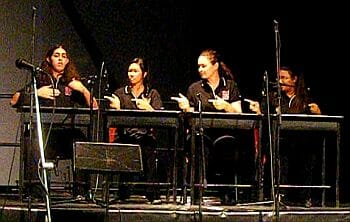 During my time as a percussionist, it has come to my attention many times, and explained to me, that practically anything can be a percussion instrument. Bands like STOMP! have showed everyone that a newspaper can be an instrument or that a lighter can entertain crowds all over the world.

So, I chose to grab a couple of friends and put together a piece for the audience at Music at Mac, called Desk-Cussion. It was originally inspired by a group in Israel called Mayumana, who composed a table piece. We chose to take their theme and play with it, make it a little more interesting and make it more relevant to our families and friends.

We practiced for about 3 weeks before the big concert and decided to put it in the show to show the audience that we were independent and capable of forming a performance without the help of our teachers.

Oh and if you don’t know what Music at Mac is (it’s been the theme for some time now) then you should know that it is the final school concert that happens every year at Macgregor State High School. Last year’s Music at Mac was especially special because it was my final one. It was very emotional and one of the most amazing and fun nights in the whole of last year. There are other videos of Music at Mac in the past few posts and there will be more coming.