This was the greatest gig ever! I don’t think I’ve had so much fun performing and improvising on stage in such a long time. I had the opportunity to play with the Band of Frequencies and the Con Artists on percussion for a special concert in the 2015 Conservatorium Theatre series. Standing Waves.

The Con Artists, the conservatorium’s leading jazz ensemble, collaborated with the Band of Frequencies (which is sort of like a surf rock/reggae/roots band but even more incredibly epic) on their own music and some jazz standards. Band of Frequencies also collaborated with the Music Technology department on a funky reggae tune with some cool live electronic sampling. I got tagged in for that piece by Mark Henman for some auxilary stuff and found out afterwards that he wasn’t expecting what I played and really loved it!

I’m hoping that while you read this you imagine me with a gigantic grin on my face, because this was such an amazing concert that I don’t think I’ll forget it in my life. The music was amazing, groovy and uplifting, and the musicians were beasts! The Band of Frequencies is a collection of professional musicians who’ve been performing together for many years and you could see how well they worked together. Combined with a full jazz orchestra, additional rhythm section with percussion, mood lighting and a projector screen showing their music videos and underwater videography, the whole performance was mesmerising. And I was on stage!!!

There were two drum sets on stage being played by Mark Henman (of the Band of Frequencies) and my best mate Lachlan Hawkins (of the Con Artists). It was groove central with these two, who just brought more and more energy to the performance as the concert continued. The whole rhythm section was locking in really well and it both sounded and felt amazing. 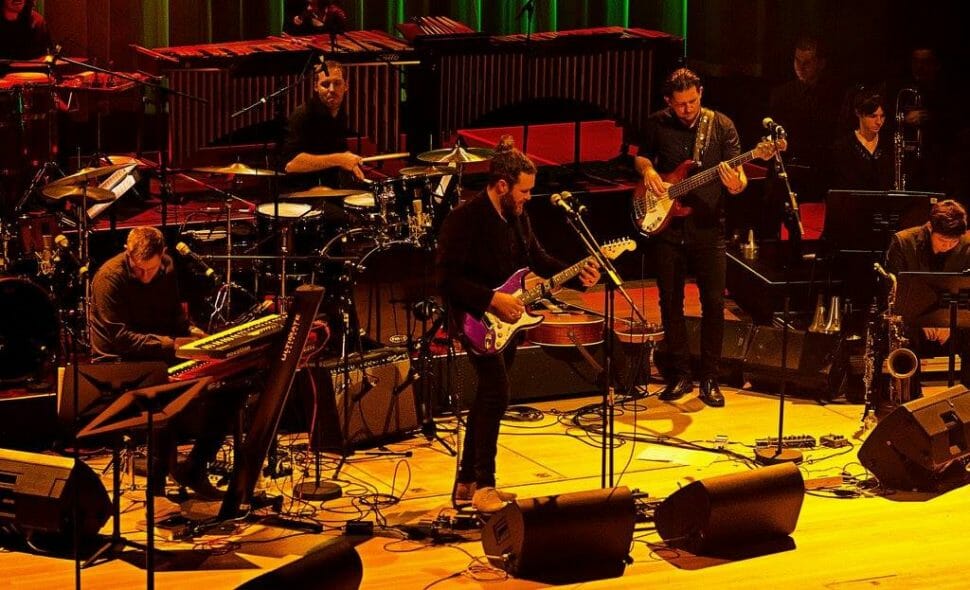 One of the greatest experiences ever to play with these guys and I’m very glad to have been a part of it!