Just played a fantastic gig on the Gold Coast with Spankinhide! We had a fantastic opportunity to perform for the Pan Pacific Swimming 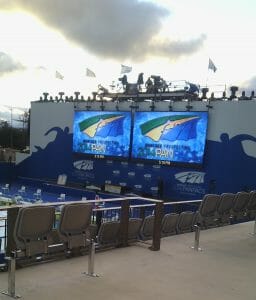 Championships. It was great fun and I actually witnessed a few world records being broken!!

Spankinhide was asked to come and perform among the crowd and get the audience pumped during races. It was amazing to see such a fantastic championship and pretty inspiring to see such talented athletes and dedicated swimmers.

The most surprising thing for me was seeing the world record being broken for the women’s 1,500 race by Katy Ledecky. She broke her own world record by six seconds and it turns out she’s only 17!

Spankinhide had to deal with a few weather set backs during the weekend. Over the four days we were there, the Gold Coast threw down a few showers on us, forcing us to cover our drums with ponchos to avoid any damage. I have to admit, it was pretty fun to play in the rain, especially since we were seeing a nice effect of water jumping off the drums when we played. I had a blast!

I’ve put a link to us playing during one of the races.

The three Africans playing with us are Sunday with the Shakers, Adama with the cornrows and Ago with the djembe on the end.