The debut of Spankinhide in my time at the Conservatorium! I decided to bring Elliott and Piers, my bandmates from Spankinhide, to play some African drumming in my recital and share a part of my musical background. The great thing about being in my final year at uni was being able to choose what I wanted to play and to play some unconventional things. 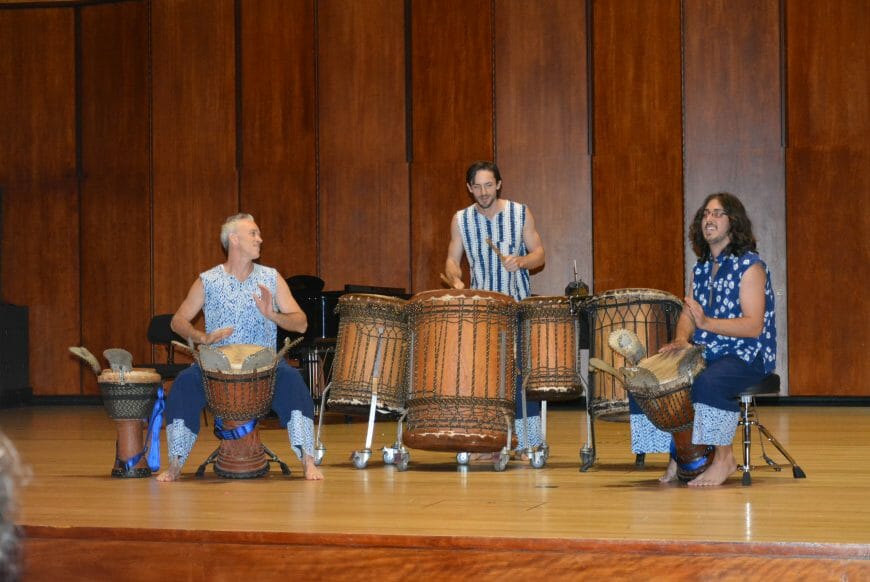 It was an out of the ordinary experience as well, because I’d never led any pieces in Spankinhide. I was always playing accompaniment parts and had very little opportunities to solo. This performance pushed me to work on my improvisation in solos and leading in that particular group.

The first piece was Zaouli, a masked dance of the Guoro ethnic group in the Ivory Coast. It represents feminine beauty and is traditionally danced by a man.

The second was N’Juzu, a sacred whale oil dance from Zimbabwe, in which the dancer anoints their naked body with whale oil and invokes ancestral spirits for healing. Elliott’s joke for this one is usually that it’s strange that there’d be an association with whale oil in an ironically landlocked country 😉

Coming straight in from N’Juzu was Wanisai, a rhythm played for the ceremony of both finding one’s purpose in life and bringing the intention of fulfilling that purpose with grace. Both N’Juzu and Wanisai are contemporary compositions written by Chris Berry. In each case there is a strong link with the Shona people of Zimbabwe.

For all of these rhythms, traditionally, there is a direct connection between African drumming and dancing and it was awesome to see that the audience really loved it.